Worst Drought in over 101 years 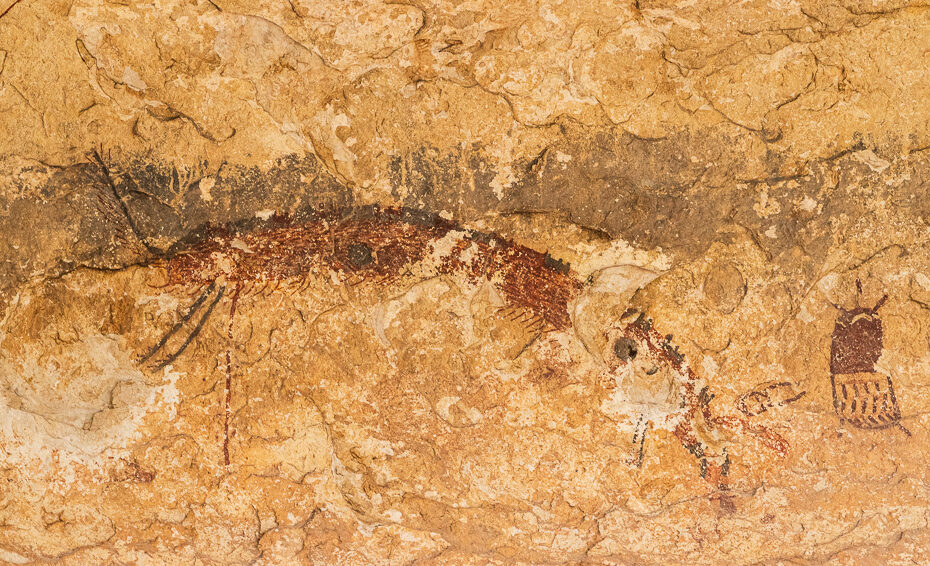 Worst Drought in over 101 years

Yes, that’s what the ranger said. “We have had only .21 inches of rain over the past year. It’s the worst drought in over 101 years.” I’m thinking to myself why did I come here? It’s hot, dry, and many things here either bite, prick, or sting.

I’m on a trek to Seminole Canyon located along the Rio Grande in Texas. What makes this so interesting is Seminole Canyon is both a geological and archeological wonder. Thousands of years ago this area was a great sea and today it is an arid landscape part of the Chihuahuan desert.

The park was home to the Desert Archaic People living here 4000 years ago in rock caves and shelters where they painted pictures on the ancient sandstone walls of the canyon. These people left around 200 rock paintings in the Pecos River area. Here, there are two pictograph sites in the canyon, Fate Bell, and Panther Cave.

My hike was to the Fate Bell Pictograph site. It is a guided tour as no one is allowed to enter the canyon unless you are accompanied by a guide. This is to protect the ancient paintings and other artifacts. I chose the morning tour.

The Ocotillo (which means “little torch”) is a spiny, leafless stem until it rains then it produces leaves. It blooms in the early spring producing a crimson flower. It is a very nasty thorny bush. Early settlers cut them and stacked them wherever they wanted a barrier. No predator or person would try to walk through it. Our guides tell us that the crimson bloom tells of a coming rain soon and they had just begun blooming.

Before entering the canyon, we stop at the sculpture created by Bill Worrell as a monumental tribute to the Desert Archaic people. It is a depiction of their ancient spiritual beliefs and the stories told by their pictographs painted in the caves and shelters.

This morning the sky is overcast keeping the temperature in the mid-80s. We hiked down the steps to the floor of the canyon. Looking upward are towering walls of black and red rock. We eventually visit a small shelter and the Fate Bell Shelter.

The Fate Bell Shelter is one of the oldest cave dwellings in North America. The ground is soft sand with pebbles from the prevalent sandstone. The ground is covered with mats to protect the stone from further erosion. The pictographs are a combination of human and animal shapes.

It is believed that the Desert Archaic people are depicting shamanic journeys to the Otherworld or spirit world. In their belief, the shaman convened with supernatural forces. Caves and rock shelters served as sacred portals for the shamans. The panther is thought to be the guardian of the shaman and allows him to travel into the spirit world in an altered form.

I’m not sold on the Shamanic journeys. It seems the Desert Archaic people enjoy peyote a hallucinogenic cactus, but who knows after all it was 4000 years ago.

After photographing and talking we head back to the top. Seems a lot longer than the trip down. The sun has burnt away the overcast now. The temperature forecast for the afternoon was over 100 degrees. Glad I went this morning. We all make it back safely and check out the museum to learn more about this historic place.

By the way, as I was leaving a few days later a mist like almost rain was in the air.

P.S. Want more like this? I send theses articles out every two weeks to photographers and art lovers who want to improve their skills and explore their own creativity and I would love to include you.

Would you like to have these articles delivered to your email? Click here and let me know where to send them and I'll start sending them with the next one I make.